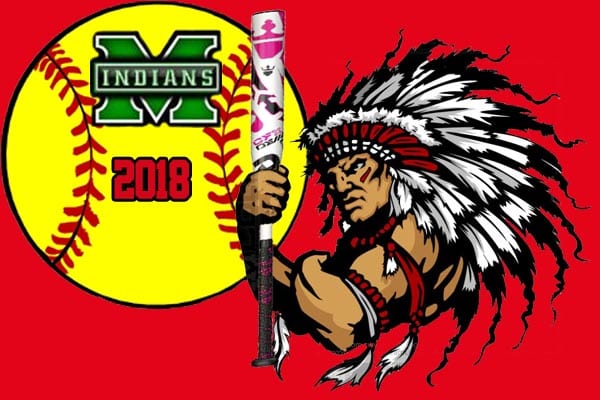 The Murray Indians welcomed in their cross town rival the North Murray Mountaineers on Wednesday for a crucial region 6-AAA match up and of course bragging rights.  2018 has started off slow for the Indians at 3-13 overall and just 1-10 in region play while the Mountaineers were off to a decent season at 10-8 overall and 6-7 in region play.

The Mountaineers took an early lead in the second inning putting up one run on the board by way of a single from Savannah Smith followed by a one out double off the bat of Annabell Ortiz.  North would add one more in the third on three singles and a sacrifice.  From that point in the game both teams would have a few opportunities to score with no avail.  That would change for the Lady Indians in the bottom of the sixth. Maddie Jenkins(single) and Natalie O’Neal(double) along with a sacrifice by Jordan Swanson pushed two runs across.  With the Mountaineers still ahead by one going into the seventh, Natalie O’Neal shut down any chances for the Mountaineers to add anything.  Murray would also go quietly in their half of the seventh forcin extra innings.

Heading in to free softball, North Murray’s McKinley Fields reached on an error to lead off the inning.  Three batters later, Kaylee Higgins stepped to the plate with two outs and took an O’Neal pitch deep over the leftfield fence to put the Mountaineers up 4-2 on the board.  The Lady Indians would have opportunity in their half of the eighth when Natalie O’Neal doubled on a line drive to left and put herself in scoring position with just one out.  The Mountaineers pitcher Talli Burgess was able to sit down the next two batters on strike outs to preserve the victory.

At the plate the Indians out hit the Mountaineers 11-9 in the game but fell short where it counts.  Stand outs for the Lady Indian were Attie Ridley- 2 for 4, Brooklyn Gonzales- 2 for 4, Rileiegh Morgan- 2 for 4, Maddie Jenkins- 2 for 4 with a run scored and Natalie O’Nealk- 3 for 4.  Allison Weaver scored the other run for Murray. O’Neal not only had a good day at the plate but also in the circle. O’Neal went eight innings throwing only 74 pitches.  In those she gave up 9 hits, 4 runs(2 earned) 2 strikeouts and no walks.  O’Neal gave up one home run.  Natalie O’Neal took the loss for the Lady Indians with numbers good enough to win most games.  The dagger for Murray was the opposing pitcher.  Talli Burgess had a complete game throwing 124 pitches and gave up 2 runs on 11 Lady Indian hits.  Burgess had 12 strikeouts and one walk in the victory.

Next up for the Murray Lady Indians will be at home as Sonoraville comes to the home field on Thursday for a 5:40 start.

Monday afternoon the Lady Indians of Murray High school traveled to Ringgold to face the home town Lady Tigers in an important region game.  The Lady Tigers sitting at 9-12 overall and 7-8 in region would be a battle for Murray who came in to Monday’s game at 3-16 overall and just 1-13 in region.

With the rough start for the Lady Indians everyone knows that things can change in just one game with just one swing of the bat to get the excitement and momentum back on your side of the plate.  Monday was unfortunately not one of those games.  There were several positives that came out of this game for the Lady Indians. The late innings push to score runs and accomplishing that as well as individuals fighting hard at the plate to get that much needed hit.  This game did see the Murray offense be shut down through the first 3 innings with only having one batter reach base by hit.  In those same 3 innings the Ringgold Lady Tigers offense put up 9 runs on 5 hits, 3 walks, 2 batters hit by pitch and 3 Murray miscues. The Lady Indians scraped together 2 runs in the fourth on a Rileigh Morgan double that scored Maddie Jenkins(single) and Jordan Swanson(walk).  Morgan battled strong fouling off several pitches before connecting  with a 2 ball=2 strike pitch and line driving it to left field.

After the Lady Tigers added one in the bottom half of inning 4, the top of 5 saw Murray continue to fight and not give up.  Putting 4 runs on their side of the score board, Murray cut in to the deficit they faced as the inning started.   The Lady Indians just plain ran out of innings.  The bottom half had the Lady Tigers answer with 4 to put them up by 8 runs and put the mercy rule in affect to take a 14-6 victory over the Lady Indians of Murray.

Murray will travel to Sonoraville on Thursday September the 20th with hopes of picking up on the offense where they left off in this last game.  Start time is scheduled for 5:30 PM.

As the 2018 regular season comes to a close the Lady Indians of Murray Co. traveled to the home of the Warriors of Lakeview-Fort Oglethorpe on Saturday for a region game.

The low scoring affair had both Murray and LFO with 5 hits in the game.  Murray wasn’t able to scratch any runs until the sixth when 1 run crossed after O’Neal reached on an error followed by a Jenkins single.  Leading the offense for the Lady Indians were Alyssa Usery(2 for 3), Maddie Jenkins(1-3), Attie Ridley(1-3), Kacie Ausmus(1-1).  Natalie O’Neal had the only walk and scored the run for the Lady Indians in the defeat at the hands of the Warriors.

Pitching for Murray was a combined effort.  Natalie O’Neal(5 innings) and Kacie Ausmus(1 inning) threw 95 pitches allowing 4 runs(3 charged to O’Neal) on 5 hits, 4 walks and 1 strikeout,  The defense behind the 2 pitchers committed 1 error in the game.  The Lady Indians now start preparing for the 2019 season.  With the JV and Middle school players coming up the 2019 season may be a ways off but the Murray coaching staff are looking forward to righting the ship next season.

The Lady Indians hosted the Phoenix of Sonoraville on Thursday for yet another region game.  Coming off a heart breaking loss just one day earlier to rival North Murray, the Lady Indians were ready to get back on the winning side of softball.

Both teams put zeros on the board through the second inning of play with Sonoraville getting a few opportunities and the Lady Indians having a runner on in the first.  The first run of the game came from the Phoenix with tweo singles and a sacrifice pushing one across.  That on run would quickly be matched by Murray putting up one of their own in the bottom half of the third.

The fourth and fifth inning were almost carbon copies of innings one and two with no runs scoring for either team.  Once again Sonoraville would put runs on the board in big fashion in the top of the sixth.  Setting the stage for Payton Townsend, the Phoenix put two runners on by way of a Murray error and a hit by pitch.  Townsend stepped to the plate and on an no balls and 1 strike count drove a Kacie Ausmus pitch over the left field fence that scored three and gave the Phoenix a 4-1 lead.  That score remained the same heading into the seventh with the Lady Indians going quietly in their half of the sixth.  Sonoraville added one insurance run in the top of the seventh for a 5-1 lead that would hold and be the final score in the win over the Lady Indians of Murray County.

3 ladies entered the circle for Murray with Kacie Ausmus getting the start.  Ausmus went 5 and 1/3 innings allowing 4 runs(3 earned) on 5 hits with 2 strikeouts and 3 walks. Ausmus also allowed 1 homerun and threw 80 pitches.  Makayley Sanford and Natalie O’Neal took the circle in relief with Sanford going 2/3 of an inning throwing just 12 pitches. She gave up 1 walk. O’Neal threw 11 pitches in her 1 inning of work with 1 run allowed and 1 walk.  Attie Ridley was 1-2 on the day with 1 run scored and Brooklyn Gonzales was 2-3 in the game.  The Phoenix put up 5 runs on 5 hits and committed no errors while the Lady Indians scored 1 run on 3 hits and had 3 errors.

The Lady Indians next game will be on Saturday the 15th against Cass in a non-region tournament,  Game time is 2:00 PM.