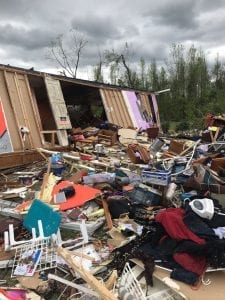 Murray County did not qualify for FEMA funds after two tornadoes ripped through the county, killing eight, and damaging more than 100 homes. However, Greg Hogan, County Commissioner, said there were other options.

DALTON, Ga.-Residents of Murray County have other options after FEMA said they did not qualify for federal emergency funds after two tornadoes killed eight and damaged more than 150 of homes on Easter Sunday said Greg Hogan, the sole county commissioner.

Georgia Emergency Management Association, GEMA, has also been out to survey the damage.

To read about the tornadoes hitting Murray County, see our story here.

“A lot of these folks didn’t have insurance and they lost everything,” said Hogan. He said the maximum amount awarded by FEMA was $35,000 but the average claim was $3,500 who said he used Tuesday’s meeting to put out more possible resources.

One other option, he said, was small business loans which have a low interest. Hogan said he researched this and discovered that because Murray County touches Tennessee, which was has a declaration of emergency, residents should qualify.

Hogan added that Governor Brian Kemp had 30 days to appeal the decision by FEMA and had sent road crews to help clean up Murray County.

In other Murray County news: