Every.One.Counts. in the 2020 Census according to the message brought by The Georgia Department of Community Affairs at Wednesday’s Lunch and Learn. The Eton-Chatsworth-Murray County Chamber of Commerce hosts the event. Rusty Haygood, deputy commissioner for the department said they hoped by focusing on the 2020 Census, people would understand how it impacts Georgia. Beth Bennett H&R Block sponsored the event. FYNTV  will feature Bennett’s 2020 tax tips starting next week, running through April. 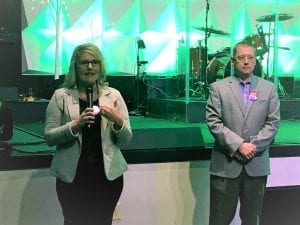 Lori Geary, left, and Rusty Haygood talked about the importance of the 2020 Census at the chamber’s Lunch and Learn program.

“It boils down to power and money,” Haygood said. “The power comes from Congress. There are 435 seats and (Georgia) gained four from the last census. We don’t want to lose any and we’d really like to gain another.”

Haygood continued by showing how Georgia received $1.4 billion in rural assistance because of participation in the census. The census is conducted nationwide every 10 years.

“The money comes from the federal government. There are 55 federal programs that are census based,” said Lori Geary, of Lexicon Strategies, which is assisting the Department of Community Affairs with getting the effort to put information out. Census data impacts school lunch programs, healthcare, and transportation.  The logo for the 2020 Census “Every.One.Counts” powerfully reminds residents that being counted is important, she said.

Using the libraries to help

“In the 2010 census, 24-percent of Murray County did not have internet access or they had dial-up,” said Haygood.

Haygood said the Library System of Georgia is a great resource for the census. They plan to equip libraries with access to the census website and forms.

“Librarians are a trusted source,” said Geary. “Last census, we had 72-percent fill out their forms. This time, we really want 80-percent.”

Haygood said the Census Bureau would send out five mailings. The first mailing could include a traditional paper form or a special code to help with filling out the online census information.

“You don’t need the code to do it online, but it’s to assist with automatically fill out parts of the form,” said Geary. “Anyone can fill it out online.”

If there is no response, then residents can expect to get up to four additional mailings.l

“If you want to stop the mailings, then fill out the form,” Haygood said with a laugh. He added after the five mailings, census workers would start going to addresses who didn’t respond.

“If you don’t want someone knocking on your door at eight a.m. on a Saturday morning, then fill out the forms,” he said.

The next Lunch and Learn is February 12, at 11:30 a.m. and Steve Loughridge, Murray County Schools Superintendent is the scheduled speaker. The event is sponsored by Oglethorpe Power and cost is $10 for members and $15 for non-members.