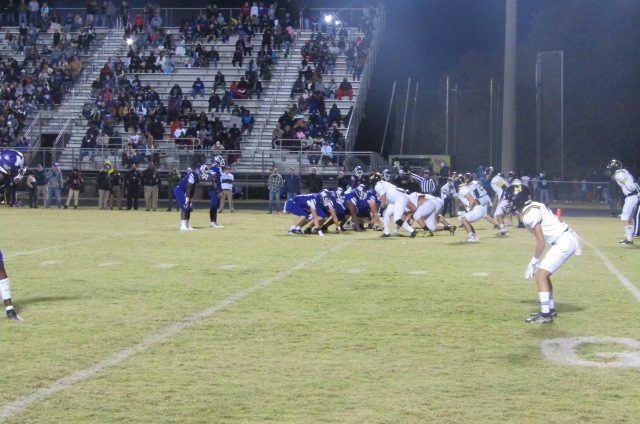 MONROE—The North Murray Mountaineers season comes to an end in the first round of the GHSA playoffs. The Mountaineers struggled to contain Monroe Area QB Selation Straughter as the Hurricane Offense racked up 58 points.

The North Murray offense struggled to gain any ground against a stingy Monroe Area defense. Unfortunately for the Mountaineers, The Monroe Area offense did not struggle.

The first drive for Monroe area ended with a 5-yard Jahlun Flud touchdown rush. Senior QB Selation Straughter added another touchdown on the Monroe Area’s next drive. The 6-yard Straughter touchdown put the Hurricanes up 14-0 late in the first quarter.

After a 3 and out by North Murray, Straughter hit Flud on a 39-yard strike to move the ball to Mountaineer 3-yard line to end the first quarter. Straughter punched it in from the 3-yard line on the first play of the second quarter.

On the next Mountaineer possession, Straughter intercepted a Griffin pass and returned it to the North Murray 13-yard line. The Straughter pick set up a Bradyn Sorrow rushing touchdown. The extra Point was blocked by the Mountaineers defensive front. Monroe Area was now up 27-0.

Monroe Area would add another score before the half. With 4:30 left in the second quarter, Straughter hit Flud from 10-yards out. Flud’s second touchdown of the night put Monroe Area up 34-0 at the half.

Monroe Area added 24 second half points before the reserves took over.

North Murray did not find the endzone until late in the fourth quarter. Seth Griffin hit Jadyn Rice on a 45-yard touchdown with 2:34 remaining. A couple of minutes later, Taylor Frazier returned a Monroe Area fumble for a touchdown. The Frazier touchdown came with just 17-seconds remaining capping the scoring at 58-14.

North Murray finishes the season 7-4, Monroe Area moves to 11-0 and will host Peach County next week in the second round of the GHSA playoffs.

Notes: Seth Griffin finished the regular season leading the State in AAA passing. Jadyn Rice Finished the Season leading the State in AAA receiving. Senior Owen Hannah finishes his career as one of the highest scoring Mountaineers in school history. This is the 3rd straight Senior class for North Murray where the Seniors made the playoffs all four years of their High School career.