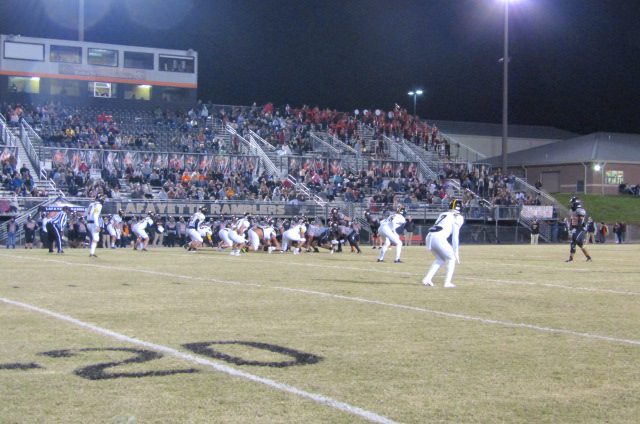 LAFAYETTE—On a cold night in laFayette, The North Murray Mountaineers wrapped up the regular season with a playoff spot clinching win. The 30-21 Mountaineer victory secured the fourth and final playoff spot for Region 6-AAA.

It was a slow start for both offenses. The teams would trade several punts throughout the first quarter as the defenses silenced the offensive stars for both teams.

The North Murray offense got on the board first. Late in the second quarter, Sr. RB Ethan Dempsey broke an 11-yard touchdown through the middle of the Rambler defense. The Mountaineers would go for two, but would fall short. The failed attempt left the score at 6-0 in favor of North Murray.

The Dempsey touchdown would be the only score of the first half between the two teams. The Mountaineers would take the 6-0 lead to the locker room at halftime.

The second half began with some excitement. Ethan Dempsey returned the second half kickoff for a touchdown, but it was called back for a block in the back penalty. The Mountaineers would start the drive at their own 23-yard line.

North Murray QB Seth Griffin connected on long passes to Skyler Williams and Jadyn Rice, leading the Mountaineers to the Rambler 21-yard line. A couple of plays later Griffin hit Dempsey on a 21-yard touchdown. An Owen Hannah extra point put the Mountaineers out front 13-0 with 9:34 left in the third quarter.

An unsuccessful onside kick from North Murray gave LaFayette the ball at midfield. The Rambler offense went to work on the short field opportunity. Several Ross Martin runs quickly led the Ramblers down to the Mountaineer 25-yard line. LaFayette QB Jaylon Ramsey put the Ramblers on the board the next play. Ramsey made his way down the sideline 25-yards for the touchdown,bringing the score to 13-7 in favor of the Mountaineers.

The ensuing North Murray drive stalled and they were forced to punt. Luckily for the Mountaineers, they had Owen Hannah. The Hannah punt hit a LaFayette player and was then recovered by the Mountaineers at the LaFayette 20-yard line. After a couple of penalties stalled that drive, Owen Hannah came in again and drilled a 32-yard field goal. The Hannah field goal extended the North Murray lead to 16-7 with just 3:31 remaining in the third quarter.

On the next LaFayette drive the Ramblers were led downfield once again by SR. RB Ross Martin. A steady dose of Martin runs brought the Ramblers deep into Mountaineer territory. Austin Tucker capped the LaFayette drive with a 10-yard rushing touchdown. The Tucker touchdown cut the North Murray lead to 16-14 with 10:29 left to play.

The Mountaineers wasted no time in answering the LaFayette touchdown. North Murray used a mix of Griffin passes and Dempsey runs to move down to the LaFayette 1-yard line in just a little over 4-minutes. Griffin stretched out for a touchdown from the one, and North Murray was up 23-14 with 6:01 to play.

A long kickoff return, aided by a facemask penalty on the Mountaineers gave LaFayette the ball at the North Murray 33-yard line. The Ramblers were backed up by a Carson Manis sack on Ramsey, forcing a 3rd and 34. Ramsey and Rambler receiver Sam Hall saved the drive by connecting on a 40 pass down the sideline for a first down. A few plays later, Ross Martin punched it in from 1-yard out. LaFayette drew to within two points at 23-21 with just 2:33 left to play.

North Murray finishes the regular season 7-3 (5-3) and will play at Monroe Area next week in the first round of the GHSA playoffs. LaFayette finishes the season 4-6 (3-5) and 6th place in Region 6-AAA.

Notes: Jadyn Rice went over 1000-yards receiving on the season early in the game. Rice joins Landon Burrell (2019) and Connor Rice (2017) as the only 1000-yard receivers in school history. QB Seth Griffin entered Friday’s game with 2,419 passing yards and leading AAA for passing in the State. North Murray makes the playoffs for the 6th straight season. Ethan Dempsey ties a career high for touchdowns in a game with 3 (Southeast)