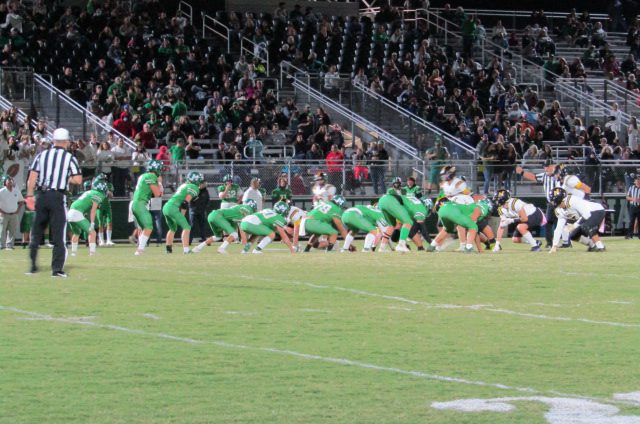 CHATSWORTH-The North Murray Mountaineers used a potent passing attack to best their in-county rival, the Murray County Indians Friday night. North Murray jumped out to a 35-0 lead, but had to battle to claim victory for Murray County bragging rights. The Mountaineers proved to be too much for the Indians, and came out on top 55-20.

The North Murray offense went to work right away. Just a little over a minute into the game, North Murray QB Seth Griffin hit Jadyn Rice for a 57-yard touchdown.

Murray County’s opening drive ended after Devin Hunte forced a fumble on a big hit in the Murray County backfield. The fumble was recovered by Liam Rogers giving the Mountaineers a short field. A few plays later, Griffin found Judson Petty on a 1-yard touchdown pass putting North Murray up 14-0.

After Murray County turned the ball over on downs, Griffin found Rogers for a 32-yard touchdown bringing the score 21-0 in favor of the Mountaineers.

Logan Gray would cap a 28-point North Murray first quarter by returning a Murray County fumble for a touchdown on the Indians next possession.

The North Murray passing attack would continue into the second quarter. Griffin hit Petty for a 14-yard touchdown just 37-seconds into the quarter. The Petty touchdown put the Mountaineers up comfortably 35-0.

The comfort would not last long.

Murray County recovered an onside kick and kept momentum on their side. This Indian Possession resembled the previous one. Knotts hit Carrell again, this time a 28-yard strike. The Knotts to Carrell connection also resulted in a 2-point conversion for the home team.

The teams headed to halftime with North Murray up 35-14.

Murray County received the second half kickoff and continued to move the ball. Their opening possession of the half resulted in a Knotts 15-yard rushing touchdown. The Knotts TD brought the score to 35-20 in favor of North Murray.

The rest of the scoring belonged to the Mountaineers. Late in the third, Griffin hit Rice on a short screen pass and he would do the rest. Rice followed lead-blocker Austin Johnson downfield, breaking several tackles as he eventually made his way 60-yards to the endzone.

The final quarter, Griffin connected with Petty for a third time. The 22-yard touchdown put the Mountaineers out front 49-20. To cap off the big offensive performance for the Mountaineers, Kaden Myers took a pass from Griffin and made his way 51-yards to the endzone.

The Myers touchdown brought the score to 55-20, and moved the celebration to the North end of the County.

North Murray moves to 6-2 (4-2) and will host Adairsville next Friday. Murray County falls to 1-8 (0-7) and will travel to LFO next Thursday.

NOTES: QB Seth Griffin crossed the 2000-yard passing mark on the season early in the first quarter. Griffin threw 7 touchdowns to 4 different receivers(Petty,Rice,Rogers,&Myers) The North Murray defense forced 3 turnovers and had their 2nd consecutive game with a defensive touchdown. Jafet Cuenca was 7/8 on extra points. North Murray moved to 8-0 against Murray County since the teams first met in 2014.