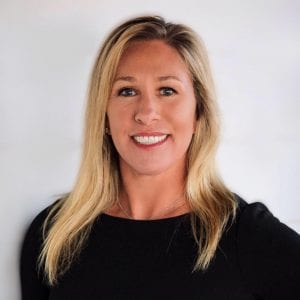 Marjorie Greene is eyeing the seat for the 14th Congressional District and standing on the platform of working for the people, holding China accountable and making certain America doesn’t shut down again. Voting precincts open August 11, and early voting is underway now. In the Georgia primary, Greene had more than twice the votes as her opponent, John Cowan, but fell short of the required votes needed for a straight victory.

Thoughts on COVID-19 and the pandemic

Obtaining reliable information about COVID-19 is one of the biggest concerns in America, said Greene. Citing 400 labs which reported a 100-percent positive test results for the novel coronavirus as well as listing unrelated deaths as COVID-19, Greene said it is critical to have the correct information.

“People want the truth because these numbers are shutting our country down,” said Greene, pointing to California, which recently shut down as their COVID-19 numbers appeared to drastically increase. “When you are looking at shutting down at this level, you have to have accurate information.” 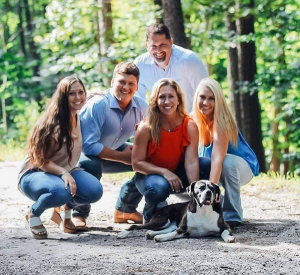 Marjorie Taylor Greene said the effects of the pandemic has made her concerned for children since schools and activities have been closed.

The business owner went on to say two issues concerned her most about the pandemic.

“From an economic standpoint, this has been devastating to people who make a living,” she said. “Even more upsetting now is the impact this will have on our kids.”

Schools shut down in March and many schools are delaying their start dates or going completely virtual.

“We don’t know how (our kids) will be affected. The children needing special education services are not receiving those services like they should. We don’t know what is happening to kids at home -how many hours are they left at home because their parents have to work? There are many children in abusive homes.”

It’s not just the learning environment of school that’s affected, she said, but all areas outside of school as well, including sports and other activities halted by the virus.

Mask or no mask 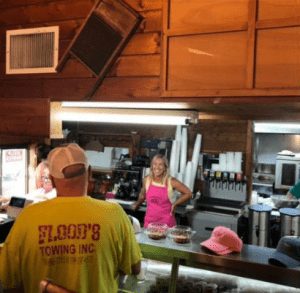 Marjorie Greene worked at Chatsworth’s Biscuit Box. Small business is critical to the economy and she said she will fight for Americans.

“I”m a big believer in freedom. I don’t believe in a mask mandate or a mandated vaccine,” she said, but added she also supports a businesses right to refuse services to those not complying the company’s mask policy as long as it’s consistent.

“If businesses can refuse services for those who don’t wear a mask, they can refuse to bake a cake if it violates their beliefs. I support the freedome we have and I want us to continue to have it. I fear for an America where we don’t have that (freedom,” she said.

Greene said that she generally does not mask, but will when she is visiting groups of people who might be considered high-risk.

Handling the next pandemic 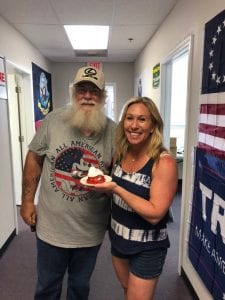 Marjorie Greene says China is an enemy of America and should be dealt with.

“It’s tough to criticize the decisions made in the beginning,” said Greene. “It’s easy to say you should have done this. However, it feels like we’ve opened Pandora’s box on what we should be doing.”

Greene said that this isn’t the first virus to hit American hard, but it is the first one to cause a country-wide shut down.

“The Democrats have used this to push their socialist policies,” she said. “They’ve used it to close schools and shut down jobs. They have a dug a fox hole and going to dig in until they get their way.”

Greene said she encourages conservatives, also know as the “silent majority,” to not be silent.

“The silent majority needs to be very vocal now,” she said. “The left is working hard for Antifa and BLM. We need a strong conservative in government.”

Greene has stood on an “America first” platform since announcing her candidacy.

“We need to  hold them accountable,” she said firmly. “They need to be held to the highest standard of accountability.”

She commends Trump for working hard on this front and said she agrees with his plan to block the Chinese Communist Party from coming in. She points to the Chinese consulate in Houston, Texas that Trump recently closed after years of evidence pointed to rampant spying.

“They are our enemy. They allowed this virus to be sent to our country. That’s an attack on American and we are reeling from it,” she said. “They need to be accountable to the highest letter of for policy. We can’t let them think they defeated America like this.” 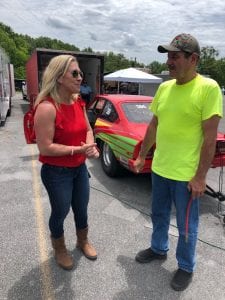 ‘In my opinion, the Democrats only one interest that is getting President Trump out of office. They are coming out of the people,” she said. “They are the anti-American party.”

She points to Democrats calling for open borders, but closing schools, and wanting to give full health care to illegal immigrants, fully fund abortions, and backing terrorist groups like Antifa and BLM.

“They are waging war on Trump and the American people,” she said. “They are making it impossible to work with them.”

In fact, she said, the Democrat party is moving past socialism to communism.

“That’s unfortunate. Congress should work together for the American people,” she said. “My focus will be working for people. I will stand up to the radical left. We have too many spineless Republicans and the American people are losing.”

The Battle for the 14th

The run-off campaign season has seen it’s share of mudslinging but Greene said there is a “very big difference” between her and her opponent. She points to her list of endorsements as proof she is the candidate who will work for the people. Her endorsements include Congressman Jim Jordan, House Freedom Fund, RIGHT WOMEN PAC, Congressman Andy Biggs, Charlie Kirk, Gun Owners of America, National Association for Gun Rights PAC, and Law Enforcement Today, and achieving 100-percent on the National Right to Work survey.

“I’m a fighter, a true conservative,” she said. “I’ll fight for the people and support President Trump.”

Writers note: Multiple attempts to reach John Cowan and his campaign were unsuccessful.