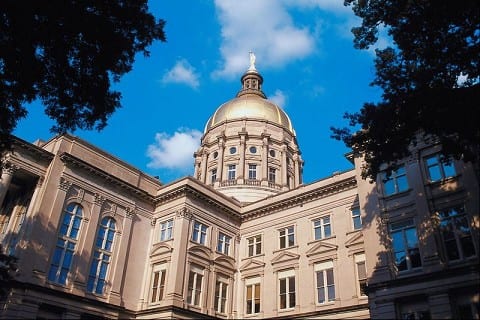 Two local lawmakers encouraged to take it one step at a time amid self-isolation after one lawmaker tested positive for COVID-19, prompting 236 lawmakers and their staff to go into self-isolation for 14 days. 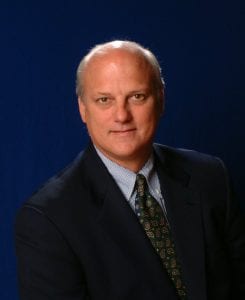 joint resolution agreeing with Governor Brian Kemp’s emergency declaration. Now, all 236 law makers and their staff have been told to self-isolate 14 days. To read the memo posted to by the Georgia House of Representatives, go here.

For Sen. Chuck Payne, R-Dalton said he is taking each day as it comes.

“We just roll with it,” he said, adding he considers himself fortunate that his children are grown and on their own.

“There are some who still have small children at home and their situation is different,” he said.

One of those with small children is Rep. Kevin Cooke, R-Carrollton. Cooke and his wife, Crystal, have two daughters, Ella, 8 and Sadie, 6. Cooke said he feels great and has no symptoms, but is taking the isolation seriously.

Cooke said it’s been tough in that his girls are used to giving him hugs and climbing up in his lap while he sits in the recliner and now there is no contact. 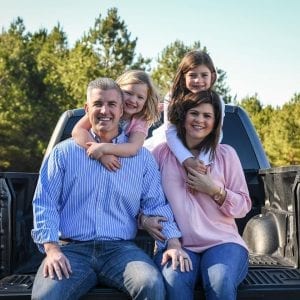 Sen. Kevin Cooke (R-Carrollton) said he hopes people will continue to shop online at small, local businesses. He is currently feeling fine but in self-isolation after being exposed to COVID-19 in legislation.

While Payne isn’t facing those kind of questions, he did say his family decided not to have a birthday celebration for their first grandchild, who will turn one later this month.

“We have to take the good with the bad,” he said “We just need to keep moving in the right direction until we get were we need to be.”

Both have given Governor Brian Kemp a voice of support and praise in the state’s handling of the Corona virus pandemic.

“It’s unprecedented and we’ve never seen this situation before,” said Cooke. “I commend our President (Donald Trump) and in particular our governor for keeping Georgia and it’s residents safe while at the same time maintain freedom and liberty of the individual.”

Payne agreed. “It’s amazing how the state and local government and everyone is 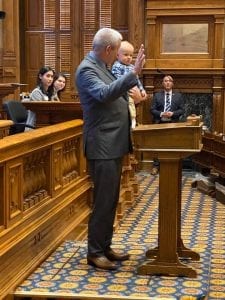 Rep. Chuck Payne (R-Dalton) holds his first grandson, Jonah, during session, last year. He said while they will not celebrate the baby’s first birthday, he is feeling confident that Georgia is headed in the right direction with COVID-19.

operating on the fly. It’s brand new to us. No one has been through it but we’re working together.”

“The action (Kemp) and the legislature is taking is helping slow down the curve. It’s been dramatic,” said Cooke.

Payne said the private sector is also taking the initiative to keep their employees and the public safe.

“People have taken action on their own so we don’t have to step in,” said Payne. “They are doing that for themselves.”

Cooke said officials are working to find a balance and try to curb panic.

“There is a lot of misinformation,” said Payne.

Both lawmakers stressed the importance of continuing to shop, online, especially with the smaller, local businesses.

Payne said history has been a great benefactor in this situation.

“We can look back and see why the Greatest Generation was called that. They were just coming out of a tremendous financial depression when they were hit with a massive war, but they never asked what was in it for them. That’s what made them great and that’s what we can do. We can serve others and become good neighbors again,” said Payne.

“When the President Trump called for a day of prayer for our nation, I thought it was a great step. That’s the best step moving forward, asking the almighty God to watch over our state and country,” said Cooke.

Payne likens the pandemic and the new restrictions to the 25-mile road marches he would do four times a year while serving with the 82nd Airborne.

“We’d parachute in, grab our gear and guns and march 25-miles back,” he recalled. “The first 15-miles were easy. We’d talk and joke around, keeping our eyes on the horizon.

“After that, it would get quiet and the last five miles were the hardest. We’d have quarter-size blisters on our feet and no one would look at the horizon. They were focusing on the ground in front of them, the next three feet.

“That’s what we have to do, focus on the next three feet on what we can control and trust God with the rest of it. We’ll get there.”

See how local small businesses are supporting each other. Read our coverage here.