For the first time in its 11-season history, the North Murray football team is headed to the state quarterfinals.

The Mountaineers took down Jackson, 24-14, in the second round of the Class AAA state playoffs Friday night in Chatsworth.

The game did not start off ideally for North Murray.

After receiving the opening kickoff, senior quarterback Ladd McConkey threw an interception to Jackson senior Anthony Henderson, who returned the ball down to the Mountaineers 9-yard line.

But the defense came out ready to play and held the visiting Red Devils, forcing a turnover-on-downs and setting up their offense with a first down on its own 1-yard line.

With such tough field position, the drive predictably stalled and North Murray punted.

The defense continued to play tough and forced Jackson into a field-goal attempt on the ensuing drive.

McConkey took it upon himself to keep the game scoreless by reaching up to block the attempt and the two teams remained knotted at zero with 2:12 left in the first quarter.

Mountaineers head coach Preston Poag said the block “killed the momentum” the Red Devils had after the interception.

“We battled like tha ton defense all game,” Poag said.

North Murray drove down the field quickly on the next possession, setting up a goal-to-go situation as the first quarter expired.

On the first play in the second quarter, McConkey hit senior Hayden Hulett with the short touchdown pass to the corner of the end zone to put North Murray into the lead at 7-0 just nine seconds into the period.

The points were the only ones put on the scoreboard in the first half as the two teams traded possessions and interceptions throughout the remainder of the second quarter.

North Murray went into the half up 7-0.

The Mountaineers came out in the second half and put up what proved to be the strongest drive of the night during the third quarter.

North Murray ate up six minutes of the period and finished the drive with a 2-yard touchdown run from senior Dylan Flood to take a 14-0 lead with six minutes to go in the third.

The Red Devils answered on their next drive as senior quarterback Josh Scott tossed a touchdown pass to put Jackson on the board at 14-7 with 3:46 left in the third.

The home team didn’t get nervous however, and preceded to put the game away in the fourth thanks to a field goal and another touchdown pass from McConkey.

“We don’t ever get ratteled,” Poag said. “We’re a veteran team with a lot of grit.” 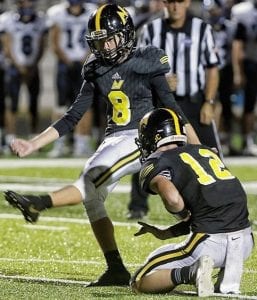 On North Murray’s first possession of the fourth quarter, the offense drove down to the Jackson 3-yard line. Facing fourth down, sophomore Owen Hannah stepped onto the field to bury the 20-yard field goal and put North Murray on top 17-7.

Six minutes later the Mountaineers put the game on ice with a 24-yard touchdown pass from McConkey to junior Dante Tidwell to go up 24-7.

The Red Devils refused to go quietly as Henderson managed to break into the secondary and haul in a 69-yard touchdown pass from Carson Biles to put the score at 24-14 with 3:34 remaining.

North Murray managed to hang on from there to earn the first trip to the state playoff quarterfinals in school history.

“I couldn’t be more proud of this team,” Poag said. “They deserve this.”

Due to a coin flip performed by the Georgia High School Association (GHSA) on Friday morning, when two teams with the same seed meet in the quarters, the bottom team in the bracket will be the home team.

To see how North Murray has gotten to the point, click here.