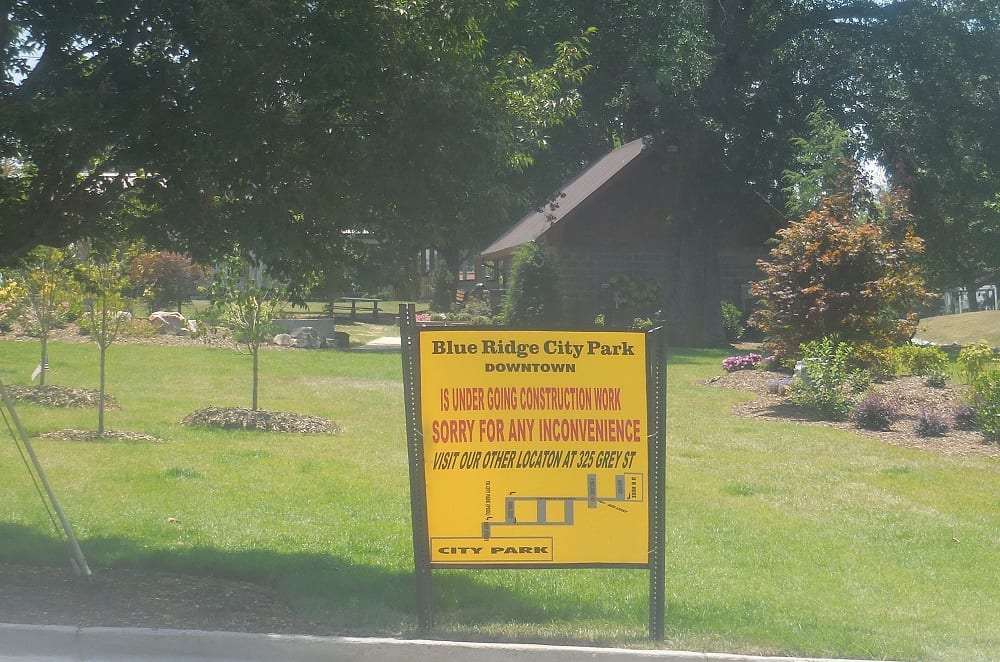 In a continuing display of ineptitude and wavering promises, Blue Ridge City Council member Angie Arp’s takeover of Blue Ridge City Park renovation will cost Blue Ridge Mountain Arts Association (BRMAA) much needed space for the Arts in the Park Festival on October 8th and 9th.  The festival will also lose a manicured background, an essential setting for a festival which bills itself as an event to celebrate art and nature. Instead of trees and grass, photos of art work and festival events will have backgrounds of yellow landscaping equipment, half-constructed playground equipment and piles of red dirt.

Arp unveiled her continually evolving plan of Blue Ridge City Park renovation at a Special-Called Meeting on Aug. 26th (read article here).  At the meeting Arp told Council Members Bruce Pack, Harold Herndon and Rodney Kendall, “The playground will be in place by the end of September.  It’s been my goal since the beginning.”  She said that playground installation will begin on Sept. 19th after the Labor Day Bar-b-que and Blues & Barbecue.  “It will take two weeks possibly,” Arp told Council Members.

Mayor Donna Whitener and Council member Rhonda Thomas were not at the Special-Called meeting. as Council Members consulted the two about potential scheduling conflicts when setting up the Special-Called Meeting said Mayor Whitener.

BRMMA met with Council Member Arp on Sep. 8th.  Arp told them that City Park re-renovation would begin on Sept. 20th.  BRMMA asked that it be delayed until after Oct. 9th.  Arp then told BRMMA that it could petition the City Council for a construction delay until Oct. 10th at the upcoming City Council meeting.  However, on Sept. 9th, Arp informed BRMAA that the playground installation company would not delay their work, thus City Park will be under construction during the Arts in the Park festival. Nicole Potzauf, Executive Director of BRMAA, said that the organization has had a festival permit for the City Park since January 2016.

Arp’s decision follows on the heels of Blue Ridge’s growing reputation as an arts and crafts destination.  In 2015, Georgia Council of the Arts listed Blue Ridge as one of the five top art towns in Georgia.  In 2016, American Craft Week named Blue Ridge as #6 in the Top Ten Fine Craft Cities in the United States, beating out regional rivals like Asheville, NC.  This year’s Arts in the Park festival falls in the middle of the nationwide American Craft Week event.

The saga of indecisiveness over renovation of Blue Ridge City Park began in 2015.  It was delayed throughout Fall and Winter 2015 due to the Council’s failure to agree on bar-b-que pit placement.  This delay cost the city a $100,000 playground equipment grant.

In February 2016, the Council voted to continue with park design. In March 2016, city workers pulled up the current playground to make way for horticulture park featuring native north Georgia plants and trees.  Habitat for Humanity of Fannin and Gilmer arranged for a university community service organization to refurbish the playground equipment.  The Council stated that some of the equipment would soon return to City Park so there would be a small play area while the rest of the park is being remodeled. The playground equipment didn’t return.  Also, since the Council had not voted which pieces of equipment they wanted to buy, the city lost its second chance at the Kiwanis grant.

Park to Open for Play in Late September

Does Angie Arp Have Control of Blue Ridge City Park?