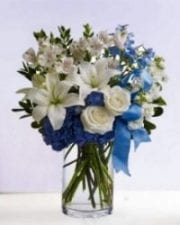 Lee Dell graduated from Red Bud High School in 1957 and honorably served his country in the United States Armed Forces, through both the Army Reserves and the Army National Guard.

Gravitt went to work as a lineman with Georgia Power Company and while employed with them, completed several Electrical Engineering Certifications with International Correspondence Schools in Scranton, Pennsylvania. Lee Dell’s strong work ethic, as well as his leadership and people skills quickly moved him up Georgia Power’s administrative ladder. He was hired as Georgia Power’s youngest Local Manager in Fairmount before transferring to Chatsworth where he served as the Local Manager there for more than twenty-five years. Gravitt later retired as the Area Manager in Dalton in 1994. In his thirty-five years with Georgia Power, Gravitt was well-known by his customers, many of whom continued to call him at home for assistance in getting their power restored long after he had retired. Lee Dell was honored by Georgia Power a few years after his retirement by having a substation named after him – Gravitt Substation on Duvall Road in Chatsworth is the only substation named after an employee in Georgia Power Company’s history. Lee Dell will long be remembered for his vital impact on the Chatsworth community. His diligent work, excellent leadership, and the relationships he built with people are all integral parts of Gravitt’s legacy. Lee Dell was a member of First Baptist Church of Chatsworth, serving many years as an Usher and a member of the Brotherhood Breakfast Committee. Gravitt also found great reward in investing in the lives of young people in Murray County. He was instrumental in planning and directing some of Murray County’s first recreational programs and coached hundreds of youth on the Little League baseball field. Gravitt also served as President of the Murray County High School Touchdown Club, as well as the announcer for the MCHS Football games for more than fifteen years.

Gravitt always made himself available for people – serving them well through his job at Georgia Power, as well as through volunteer work in the community. Over the years, Lee Dell was a member of the Kiwanis, Rotary, and Lions Clubs of Chatsworth, as well as the President of the Murray County Jaycees. Gravitt also served as a volunteer fire fighter for the City of Chatsworth. He served for six years on the Murray County Hospital Authority and also served as chairman of the hospital board, leading a major initiative in Physician Recruitment and adding services to the hospital’s facility, including the development of the professional office building. Gravitt spent many hours implementing an aggressive marketing campaign for the hospital which received national attention. Gravitt also served on the Board of Directors for the Northwest Georgia RDC and the Murray County Chamber of Commerce.

Gravitt’s generosity was noted through the time he spent with people, as well as the continued opportunities he took advantage of to make a difference in someone’s life. He was always willing to lend a hand and help those in need and he never met a stranger. Throughout his career, Gravitt received a number of honors and awards, including the Murray County Jaycee’s Spark Plug Award, Outstanding Jaycee Award, and the group’s Young Man of the Year Award. Gravitt was also recognized by the Vocational FFA as an Honorary Chapter Farmer and he also received many other volunteer awards in the Chatsworth community. Gravitt also received numerous awards from Georgia Power, including their Safety and Health Award, the company’s Fiber One Project’s Long Shot of the Year Award, as well as Georgia Power’s Outstanding Individual Award. Gravitt received the Mayor of Chatsworth’s Distinguished Service Community Award, and was honored by The American Heart Association with the Heart of the Community Award, as well as The Chatsworth-Murray County Chamber of Commerce’s Award of Excellence.

Lee Dell was an avid bird hunter and fisherman. He enjoyed many hunting and fishing trips with his closest friends and family over the years. Even as he enjoyed his favorite hobbies, Gravitt continued to serve people – often cleaning and cooking his catch of the day and delivering it to shut-ins and family friends who always looked forward to the delicious meal, as well as Gravitt’s fish tales. Gravitt also utilized his work training and leadership skills, no matter where he was, including on a fishing trip in 1986, when a Dawsonville, Georgia man, unknown to Gravitt, was involved in a boating accident on Lake Lanier. Gravitt and a friend were fishing nearby and realized the man was underwater trapped in the boat’s propeller. Gravitt’s quick response to administer CPR and Life Saving Skills not only saved the man’s life, but earned Gravitt a nomination for a Presidential Lifesaving Citation through the American Red Cross.

Despite all of his accolades and career accomplishments, those who knew Lee Dell Gravitt know that his greatest legacy is the family he leaves behind. He was a loving husband to his wife, Patsy, for more than 55 years and was an amazing father to his three children: Mr. and Mrs. Randy Gravitt of Sharpsburg, Dr. and Mrs. Ryan Gravitt of Tifton, and Mr. and Mrs. David (Ronna) Bush of Carrollton. One of Gravitt’s greatest joys was being a PaPaw and spending time with and bragging about his eight grandchildren: Hannah, Sarah, Rebekah, and Katherine Gravitt; Christopher and Jessica Gravitt; and Emily and Lauren Bush.

Lee Dell Gravitt was preceded in death by his parents, Obie Dell and Beatrice (Baker) Gravitt, as well as two brothers, Maurice Gravitt and Milton Gravitt and a nephew, Ken Gravitt. Lee Dell is survived by his wife, children and grandchildren, two brothers-in-law and their wives, as well as several nieces and nephews.

A private family burial will precede visitation and services will be held at First Baptist Church of Chatsworth on Monday, March 28, 2016. The family will receive friends in the sanctuary of the church on Monday from 4:30-6:00pm and a Celebration of Life service will follow at 6:00pm.

Memorial contributions can be made to the Elevator Fund at First Baptist Church of Chatsworth. Peeples Funeral Home of Chatsworth is in charge of arrangements.