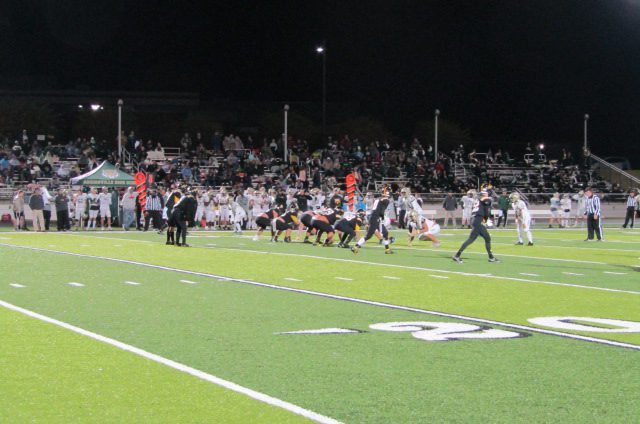 CHATSWORTH- North Murray struggled to contain a bruising rushing attack as they fall to Adairsville 47-18. The loss is North Murray’s third Region loss and the Mountaineers final home game of the season.

Adairsville opened the scoring early on a Chris Roper 71-yard touchdown run on the second play of the game. A missed extra point left the score at 6-0 Tigers. The Mountaineers answered on the ensuing possession with a Seth Griffin to Judson Petty 36-yard TD pass. Griffin would connect with Petty again for a 2-point conversion. The 8-6 lead would be the only time Mountaineers would enjoy a lead.

North Murray recovered an onside kick on the kickoff but an Isaac Linley Interception and return gave the Tigers the ball in North Murray territory. Adairsville quarterback Jonathan Gough finished the drive with a short rushing touchdown a few plays later. The Tigers failed on the 2-point conversion leaving the score at 12-8.

After a North Murray punt, Adairsville put together another scoring drive. A long Chris Roper run set up a 5-yard touchdown rush for Eli Agnew. The Agnew touchdown extended the Adairsville lead to 19-8.

North Murray fumbled the ensuing kickoff, their first of two straight kickoff fumbles. The fumble set up Adairsville inside the Mountaineer 20-yard line. The North Murray defense stopped the threat when Shawn Myers picked off an Adairsville pass at the goal line and returned it to the Adairsville 23-yard line.The Mountaineers offense continued to struggle and they settled for an Owen Hannah field goal. The Hannah field goal moved the score to 19-11 with the Tigers out front.

In the third quarter, Agnew would add his second and third rushing touchdowns of the night. Adairsville headed to the fourth quarter with a comfortable 47-11 lead.

North Murray added a late touchdown when Liam Rogers took a Griffin pass 68-yards for a touchdown. The Rogers touchdown brought the game to what would be the final score at 47-18.

The loss drops North Murray to 6-3(4-3) and will travel to Lafayette next Friday. Adairsville moves to 7-2(5-2) and will host LFO next Friday.

NOTES: North Murray can secure the 4th playoff spot for the region with a win over Lafayette next week. A loss to Lafayette opens the door for a possible 3-way tie between Sonoraville, Lafayette, and North Murray.